Happy Holidays.
One thing I can never get used to in America is their strange aversion to calling Christmas by its real name. Happy Christmas. 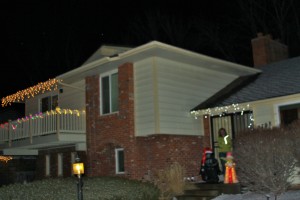 As I have commented on before, the incidence of church going in this fine country is enormously different to the UK. There are more Christian churches within 3 miles of our house than in the whole of most counties in England. One of these days I am going to do a survey of churches in the area, but I still haven’t summoned up enough courage to blog on that subject yet.
My very knowledgeable son tells me this strange behavior is due to “the separation of church from state”. Apparently the constitution mandates that there is no governmental acknowledgment that we have just celebrated a day on which the majority of the population think that their God’s son was born.
Most people in the US don’t say Merry Xmas, and there is no Boxing Day holiday the day after. Strange though it might seem, in America there is no celebration of the day when the upper classes in England used to give their servants their annual present. Somehow, that tradition got lost during the American Revolution.

We started our holiday with a trip into the mountains. One of the key benefits of living in Denver is that the trip from our house to the car park by the ski lifts at Breckenridge took less than two hours. The other benefit, particularly to a poor skier like me, is that the slopes are wonderful. The pistes are wide, the snow is lovely, and there is no ice to scare me to death.
I mean that there is no ice on the slopes, obviously there is always far too much ice in the drinks. 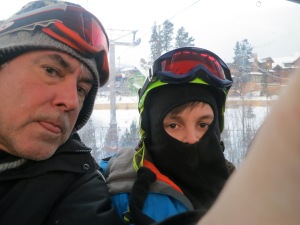 As a very poor skier, this is the place to practice falling over. When this happens in the Alps, the snow boarders spray snow in your face, and the kids use you as a ski jump. In America, when the inevitable happens to me the whole slope stops, and several people try and help you up. And they don’t even push in at the lifts.

However, the highlight of my Xmas was not my visit to the Emergency Ward.
Now let’s be clear, arriving at ER at 5 past midnight on Xmas morning in the UK would be an exercise in painful patience, as one waited for 3 or 4 hours for the drunks to be processed. I was processed and in a bed within 10 minutes.
I will skate over the procedure to return my arm into the proper configuration, but put it this way, I was a lot more sober than my wife by the time they got my shoulder back in one piece. The only delay, was waiting for them to wheel over the portable x-ray device over, and develop the pictures. Twice, without even moving me. The whole process took two hours, and everyone was very pleasant, and extremely professional.
The only problem was finding dear Heather as she wandered around the hospital, so she could pay for our part of the costs. We have an excellent insurance policy, one of the best money can buy, but we still had to process a credit card charge for $250 before they would let me out. The insurance company will have paid over $2,000.
My feelings about this issue are a bit complicated, who would wish they had waited 4 hours instead of 10 minutes? But with the issue of “Obama care” in the news every day, I keep asking the same question….what happens to the 44 million Americans who don’t have health insurance cover?

But I have an admission to make. I didn’t injure myself on the ski slopes, I fell over in my neighbours’ garden while staggering home from a few drinks.
I have promised not to sue the neighbours, that probably proves I have little chance of turning into an American.

However, I did fall off the first ski lift we got on.

Happy holidays. Despite being an old man with only one working arm, I had a great Xmas with family and friends.

We are all looking forward to our second calendar year in the America, it is a fascinating country, with lovely people, but really quite different.

When I think of road trips, I drift back to National Lampoon’s Vacation.
We weren’t going to Disney (they called it Walleyworld), and we certainly didn’t have a dead grannie. We didn’t even have a dog tied to the back fender (bumper), and Ben refused to lie still when we tried to tie him to the roof.
Last week it was Spring Break. If you are following my love affair about this fine country, you will know that I have a thing about the American obsession with religion. I have always been taught that Easter was the biggest Christian festival, but everyone worked on Good Friday.
Good Friday?
And we didn’t do an Easter holiday, we had a Spring Break.
We had a pair of lovely friends over from the UK, so we borrowed a car with 3 rows of seats, and got out on a Road Trip to New Mexico. Yep, three rows of seats, this was a real road trip. 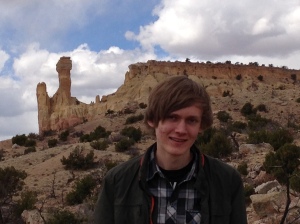 Unfortunately, my memories at this point go back to my youth. Camping in Europe was not common in those days, but that’s what my parents made me do. We would drive to obscure European countries, and camp. I know a lot of my friends don’t believe it, but yes, we camped.
And the following morning we would pack up, and put the whole thing on top of our Austin Cambridge. But on one occasion my Dad got it wrong, and once we were doing a fine lick on the autobahn, it all shot off the back. No deaths, but a lot of tears.
There is a reason I don’t do camping any more, and it isn’t just that I found that there are things called Hotels.
So, off we went, and there were strict instructions on the packing, one small bag each. This is a bit of a problem for Ben who can get through two pairs of dodgy coloured trousers in a day, but I explained he had a choice. He chose the seat in doors that his bag would have occupied, which made it easier; as I said, I never feel happy strapping things to the roof.
Santa Fe is 400 miles due south from us, not a difficult route, the interstate freeway is a mile from our house, and once on the I25, unlike the M25 in England, you are moving at a good rate. And it is straight, on occasions it is dead straight for 20 miles, and it goes all the way to Santa Fe.

So, 6 hours later we are in the coolest, most laid back part of America. These guys can’t be bothered to go to California, where us Brits think the mother of cool sits, they stay in New Mexico and they really chill. The only thing that stops the chill is the prices in the shops, jeans for $300, “native Indian” sweaters for $400, this place is where rich cool people go. The lady in the shop in the old jail building told me Julia Roberts lived up the street, and “don’t miss the café next door where they filmed a Clint Eastwood movie”.
We visited rocks, we walked around a lot, and then we got to the Indian cliff dwellings. I loved this bit, a genuine Indian guide, and jewelry even I could afford.
The best thing was wandering around the caves the Indians lived in 500 years ago, and then we got to the cave paintings. Now I can’t lie, this story isn’t mine. Our dear friends Denise and Tucker went there with their bright 13 year old, and the guide got everyone very excited by the fine drawings of hands on the walls. Abi then pronounced her profound dismay that whist Michelangelo was painting the ceiling of the Sistine Chapel, the Americans were drawing “turkey hands”.
My family complain on these trips, not about the distances, but about the picture stops, but there was one stop I had to make. In every country they have warnings about the animals that are going to charge across and ruin your car (apart from the deer that got me in Oxfordshire). So as we drove on the roads around Taos in Northern New Mexico, there were arguments. I did agree that the pictures of cows crossing did look peculiar, what was that strange thing over their heads?
Not a sombrero as Heather suggested, but instead a flying saucer – the locals are peddling a story that aliens are coming down and abusing their cattle. Forget crop circles, these guys have a conspiracy theory that has some action going on, and presumably it all helps with the tourism, bearing in mind Roswell is just down the road.
So we headed back through the mountains at 85mph without any police interference, and I do have to admit that this still gives me a strange thrill. In 1978 I was driving in New England, when I got pulled over by a policeman for doing something absurd like 70 in a 65 limit. I still remember the fear I felt as he strode up to my hire car with his gun vibrating in his holster. And then he gave me a ticket, and the bizarre thing in those times, he trusted me to go down to County Hall and pay it. Ha, the fools.
However, I paid a high price for my crime, spending nervous hours worrying as I stood in the huge queues at JFK, wondering which jail they were going to put me in.
Road trips, fantastic, but only in America. You can get to a different land in 6 hours, in the UK, you are still on the M25. Please try it, they are something very special.